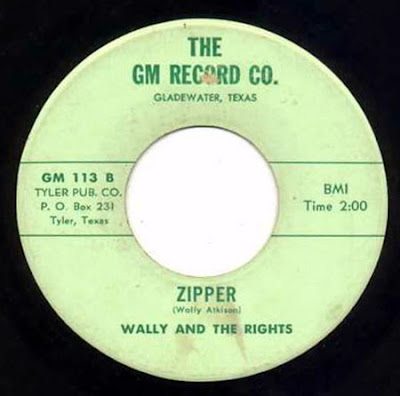 Wally and the Rights

First gig. My first gig was at age 14 as a drummer in a country band at the Rendezvous Lounge in Gladewater, Texas. Performed alot of Hank Williams tunes. Made $15.00.

Wynona Hoedown: At age 15, I opened up for George Jones at the Hoedown. Sang in a duo with my friend Terry Rowden. We wore red courderoy bowties and vests made by my mom Julia. The concert was live on the radio.

Wally and the Rights. My high school band. We had piano, bass, drums and me on guitar. We recorded two original tunes, Hey Now Little Girl and an instrumenatl called Zipper in Gregton Texas. Played many school events. Club dates were limited, couldn't get any adult chaperones other than my dad George.

Today is the 132nd birthday of Gideon Sundback. The Google Doodle of today honors the father of “the modern zipper”. It's perhaps the company’s most enticing Doodle yet. The sound of the zipper may evoque some delicious moments in your memory, but this Google Doodle has no sound unfortunately.