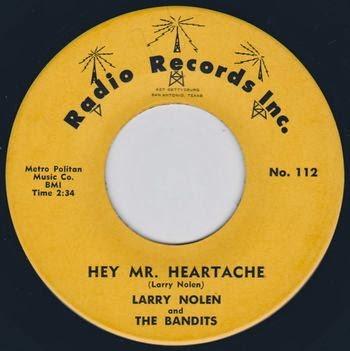 Larry Nolen And The Bandits


In 1946, when he was barely 13 years old, Larry Nolen began his professional music career. He was asked to play rhythm guitar with The Mountain Rhythm Band which featured Boy and Gene, the Jacoby Brothers. Smiley Whitley, leader of one of the most famous western swing bands in Texas, recognized a star on the rise and invited Larry to play with his band, Smiley Whitley and the Texans. They performed most Saturday nights at Bandera’s famous Cabaret Dancehall and also hosted a radio show at San Antonio’s KONO / KMAC radio station five days a week. Larry delivered his first solo radio performance one day when he was the only band member who was able to travel to the station during a severe ice storm in San Antonio.     http://www.songridersstudio.com/larry-nolen.html