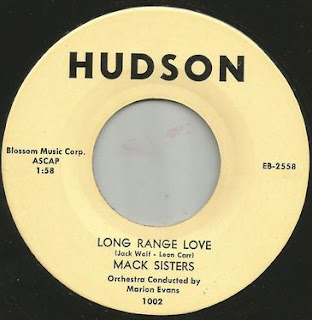 Better known as The Mack Triplets since their singing careers debut in 1943.  The three sisters (not really triplets) Eileen, Charlotte and LaVerne were born McAuliffe.  They launched their professional singing careers quite inauspiciously in 1943 when their agent booked them at a nightclub in a tough Brooklyn neighborhood.

''Nobody in the audience paid attention to us. They were more interested in drinking,'' mused Charlotte, who recalled the trio received $15 - total - for the gig. ''Out of that we had to pay the agent's fee.''

But the future looked brighter in 1944 when the Mack Triplets went on radio with Phil Spitalny's Hour of Charm. They also toured with Spitalny's all-girl orchestra.

The Mack Triplets went with Dean Martin and Jerry Lewis on a three-week gig at Slapsie Maxie's in Hollywood,  played the London Palladium with Tony Martin and, for years, were performers in the live stage shows in Lowe's theater chain. They also did the first Phil Silvers TV show and made two appearances on the Milton Berle show among their scores of credits.


The Mack Triplets produced a number of records with varied success. Their best sales were overseas, especially in Australia.   With the popularizing of rock 'n' roll, the entertainment world was changing drastically. And the sisters opted to retire from the stage in the late '50s.

''Besides, it had become tiring. I remember doing eight shows a day at Atlantic City's Steel Pier,'' said Charlotte said. ''It was time to get out and raise our family.''