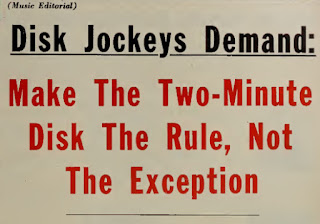 For years now, The Cash Box has been campaigning for two-minute records for juke box operators.  We have pointed out time and time again how important they are because the period in which an operator gets peak play is highly limited and records that run longer than two minutes cut drastically into his possible income.

But now sevral disk jockeys, among them Joe Deane of Pittsburgh and Ed McKenzie of Detroit, have pointed out to us that the two-minute record is just as important to the disk jockey as it is to the operator.

The demands upon a disk jockey's time today are enormous.  There are more records than ever being issued and each one is being promoted.  They are all being offered to disk jockeys for air play and a disk jockey has a terribly difficult time deciding what to play and what not to play.  One important factor which he considers when he is deciding is the lenght of the record.   If he has twelve minutes of available playing time, he would certainly rather play six two-minutes records than four three-minutes ones.

Today, the disk jockey's situation is one in which the time available for playing records is strictly limited.  On most shows, sponsors' messages take up considerable space and must be considered before anything else.  Since many shows are highly packed with sponsors — a situation which is encouraged by both the station and the disk jockey, for after all, they are engaged in a commercial enteprise — messages sometimes cannot be spaced as far as three minutes apart so that the longer record cannot be played simply from a physical factor point of view.

From every angle, it is obvious that the two-minute record has a better chance of being played and is therefore more in the interests of the record company, publisher, artist and everyone else connected with it than a longer record.

Disk jockeys and opeattors together determine a great deal of what happens in our music business.  When they combine their interests and demands, they are irresistible.

And here is one need with both of them share.

If each will make his needs known vociforously to recording men of all capacities, it won't be long before the two-minute record is the rule rather than the exception.