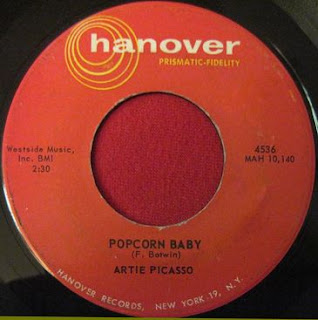 Popcorn Baby was copyrighted in May 1959 by Norman "Red" Benson (words) and Leonard Levy (music). For some reason (payola?), the song on label is credited to one F. Botwin.

Norman (Red) Benson was master of ceremonies in mid-1950's for NBC-TV's Name That Tune and joined WPEN (Philadelphia)  in 1956.  Leonard (Len) Levy was the head of Hanover Records. Artie Picasso (a pseudonym perhaps) is unknown, possibly from Philadelphia , .  His lone record anyway under this moniker.