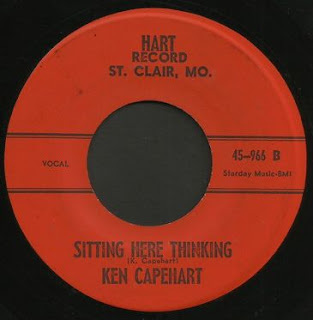 From St. Clair, Missouri, in the Starday custom series

Ken Capehart (1924-2013)
Kennneth Charles Capehart, known to all as Ken, 89, St. Clair, passed away Tuesday, Dec. 17, 2013,
Ken was a Christian and longtime member of First Baptist Church, St. Clair.  During his working career, he was a member of United Brotherhood of Carpenters and Joiners of America Local 1839, St. Louis, where he worked on various projects as a carpenter through the union hall.  He was proud to have served his country in the U.S. Army during World War II..  Ken earned five Bronze Stars and a Good Conduct Medal for his participation in several campaigns in Europe, including Normandy and central Europe. He had a passion for music, playing guitar and singing in his band, Ken Capehart and the Carol County Ramblers.  He even backed up Loretta Lynn when she first started out. Ken also loved to fish.