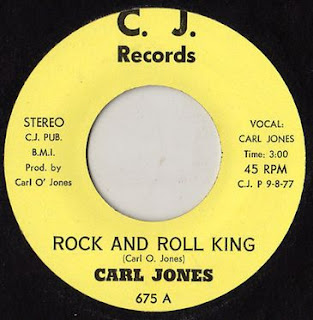 
Musician and Chicago-based record producer, Carl Jones was born in Waxahachie, Texas.  As a teenager he took up the banjo and eventually addet trumpet and trombone to his instrumental repertoire. He got a show on the local radio station, WXA, singing and playing. Jones soon joined the Carolina Cotton Pickers, the first of many groups to which he belonged.  He moved to Chicago in 1937 and in 1945 recorded two sides for Mercury.  He founded the C.J. label in the late fities, eventually followed by two more, the Colt and Firma labels.  He is best known for his output in the blues field, having recorded Earl Hooker, Mack Simmons, Hound Dog Taylor, Homesick James and Detroit Junior.

Jones's record company was never more than a boutique operation, and he maintained his nine-to-five job in the liquor distribution business and worked on Sundays as a bartender at a famed South Side blues bar, Theresa's.

When Jones died in 1985 he was still operating his record company.


[Info above from Robert Pruter]
Posted by Bob at 9:42 PM