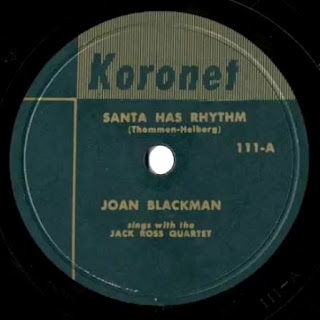 Joan Blackman was 12-year old at the time of this record, her only record as far as I know.
Joan Blackman was bom in San Francisco on May 17, 1938. the only child of Ivy and Frank Blackman. Her father was a musician. At four, Joan took dancing lessons; she had her start singing (probably with the Jack Ross Quartet) in San Francisco at the Fairmont Hotel and other spots around the City.  After graduating from Lincoln High School in 1956, she became a model.

Blackman appeared in her first motion picture, Good Day for a Hanging, in 1959. She had a significant role in two Elvis Presley films. She played Maile Duval in the 1961 film Blue Hawaii and the following year played Rose Grogan in Kid Galahad.

One of the scenes in Blue Hawaii is the Hawaiian Wedding Song, when she and Elvis marry. Very few actresses were allowed to sing opposite Elvis. Those few lines in that scene are the only words she was able to sing in his film, unfortunately. Ann-Margret and Juliet Prowse, on the other hand, had their own singing scene in Viva Las Vegas and GI Blues.