You Fascinate Me, Baby 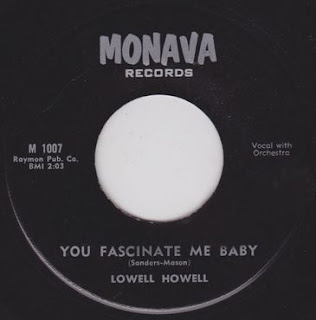 You Fascinate Me, Baby

October 1955 : Mona C. Herren announced the forming of a new independent record com-
pany to be known as Monava Records.  "The company is contemplating a heavy recording schedule, and first releases will hit the market about the middle of October. " according to the Cash Box tidbit (October 15, 1955).

Despite the contemplated heavy recording schedule, there was not too many records issued, as apart from this Lowell Howell release, I've found only one other release on Monava : The Monettes accompanied by the Musicleers (on 78 rpm).

Lowell Howell was M.C. at the Dude Ranch in Long Beach in the early forties :"Lowell Howell, M. C, directs the shows and sings every night except Tuesday" [Why not Tuesday? The Dude Ranch closed every Tuesday, that's why]