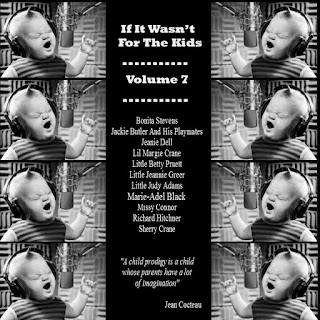 Bonita Stevens - All Girl Band
She was 9 years old when Bonita Stevens recorded her first single in 1967 in Nashville, which was issued by Sims Records (In Between Trains/Take Your Guitar And Git).   "All Girl Band", her second single from 1968, was on the Pretty Girl label, one of many subsidiaries of Style Wooten's Style Records Productions founded in 1964 in Memphis, Tennessee.

Jackie Butler And His Playmates - Paw Ain't Got A Cent
Jack Butler had started out in music when he was seven years old.  In 1951, he won the $100 first prize in the North Carolina Annual Hillbilly Contest and even made a couple guest appearances over WLAC in Nashville, Tennessee. He was then 11.  Jackie Butler and his Playmates were heard each week on Saturdays and Sundays on WRRZ out of Clinton, South Carolina.  More info here

"Lil" Margie Crane - Pretty Face, Cute Figure
From 1964 and one of the last on the label, discontinued in late 1964. Produced by Bob Swaringim & Clem Murski who also wrote both sides of the single.  Eric - a division of Crazy Cajun, Conroe, Texas - .was probably Huey Meaux's most significant early label, on which Barbara Lynn made her debut ("Dina & Patricia").

Little Betty Pruett - Satan Lied To Me
From 1967 on the Arlee label (Hickory, North Carolina). A member of the Wilson Baptist Church of Bostic, N.C., Betty later recorded several albums with the Betty Pruett Singers, a trio consisting of Betty, her brother, Ronnie and her mother, Joyce.

Little Jeannie Greer - Who, What, Where, When, How and Why
From 1955 on the Sandy Stanton's Fable label.  A fascinating label as noticed by song-poem collector Bob Purse:  "most of the label’s output was not of the song-poem variety, although there seem to have been at least some vanity records and hybrids among the releases, and second, many of the non-song-poem records released by Fable are really great and/or fairly (or very) odd, particularly those featuring the guitar and band-leading of label head Sandy Stanton".

Little Judy Adams - I Slipped And Fell
From "Little Seven Year Old Judy Adams Sings For The Little Girls And Boys" her album issued in 1968 by Process Records (Franklin, Pennsylvania).  Backed by Gordon Sizemore on guitar. Little Judy is possibly related to Jimmie Adams, one of the three composers of the song.

Marie-Adele Black - I Want to Be a Mother
From the LP "Songs For A Mormon Child", a collection of 16 "bright and happy" songs penned by Sister Janeen Jacobs Brady and issued in 1976 by Covenant Recordings (Salt Lake City, Utah)
In 1991, then a soprano (age 22), Marie-Adele won the second place and $400 at the Finals of the Utah Metropolitan Opera auditions.

Missy Connor -  Cowgirl For Jesus
A no label 1980 custom recording from Sutton, West Virginia. Missy began her musical career at the tender age of five.  Carolyn, her mother, traveled with her evangelistic family for many years singing country and southern gospel music. Originally from Canton, she met and married Don Connor of West Virginia. One year later Missy was born. The family booked as The Connor Family was now The Connors.

Richard Hitchner - I Want A Rocket Ship For Christmas
Full credit on label: Eddie Williams and his Echo Valley Rangers, vocal Richard Hitchner.  The Echo Valley Rangers, a country swing band, a 4-piece unit led by Eddie Williams, a member of the "Grand Ole Jamboree" since its start.  Issued in 1958 on M.P.P.C. Records (Woodstown, N.J.).  M.P.P.C. stand for Motion Picture Productions Corp. Doesn't that sound impressive?  Actually this was a quite small label, also known as Mopic, possibly operated by Norman (Old Lad) Kingsley, director of The Grand Theater in Woodstown.

Sherry Crane - Winnie The Parakeet
Recorded by veteran country and gospel singer Wally Fowler who pitched the master to Sam Phillips. Backed with"'Willie Willie'' , the song was issued on Sun 328 in the summer of 1959.  Two other masters from the same source, unreleased at the time, came out finally on the Trumpet label out of Atlanta, Georgia in the summer of 1964 : ''I've Just Discovered Boys'' b/w "Santa Bring Me a Puppy Dog". One Billboard' panel member, finding the record, was a little surprised. « Even with the air conditioning going full blast, it’s kind of hard to take this record seriously. » Meanwhile, outside the thermometer hovered around 92 degrees. (Panel Cool To Yule Disk, Billboard July 11, 1964)