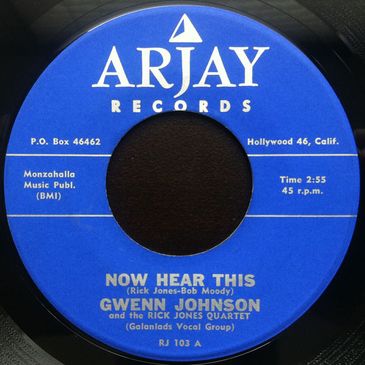 I've found so much discordant information about this recording, that the best thing to do is probably to just relax and listen again and again to this bewitching love song.

Song was first issued in 1956 on Steve Riggio's PIV label. Arjay is probably a second issue from the late sixties/early seventies issued by Rick Jones on his own label [my guess]. Gwenn Johnson may be or not the sister of Plas Johnson.

On the PIV single, the vocal group is credited to The Mad Hatters, but co-composer Bob Moody was member of The Galanlads, credited on this Arjay release. Go figure !