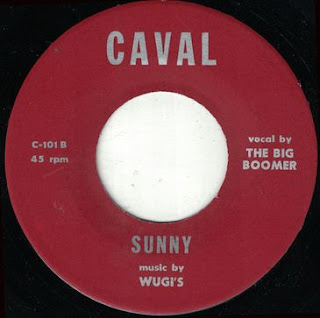 The Big Boomer
music by Wugi's

*The Wikipedia article fails to include Ernie Carsele among the notable people from Ellwood City. On the other hand, Leslie H. Sabo, Jr. has not be forgotten, he a Vietnam War hero who posthumously received the Medal of Honor after 40-year lag period. I wonder if that did something to him up there.

ELLWOOD CITY - Tiny Tim has nothing over the Big Boomer. Ernie, "The Big Boomer" Carsele, has cut his first 45 r.p.m. record on the Caval label, Boomer, as he is affectionately called by his friends, chose two old standards for his first effort. The sides are "Sunny" and "Five Foot Two." Boomer's record was released recently and should be available in local record stores in the near future. The background music for Boomer's recording is by the Wugi's featuring Tony Carozza on accordian. Boomer is now appearing with the Wugi 's at Lou's Tavern. Boomer is a fairly recent discovery, He began his singing career about a year ago. By day he is employed by the U.S. Steel Ellwood Works and by night he is slowly breaking into the world of local entertainment.

Those who have seen Boomer enjoy his low throaty rendition of "Sunny," but his fans go almost hysterical when he tosses nut ,"Blue Hawaii" in effortless fashion. When Boomer sings "Blue Hawaii", and most of his songs for that matter, he wears a Panama hat with a "lei" around his neck. The Boomer is not one of those singers who need a multitude of gesticulations to perform their numbers.. His manner is rather denominations. Most of its quiet and sedate and not without power. Sometimes he is almost speaking when he sings.

Boomer's reputation is somehwat like his singing personality - quiet, but, slowly gathering momentum.

I cannot recommend highly enough the YT channel operated by Mark Lee Allen where I found this little jewel.