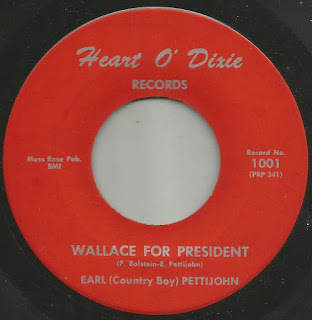 
Let’s All Back George Wallace

According to "one multiculturally sensitive" seller several years ago on a well-know buy & sell website :

I have listened to the record several times to find any racial remarks and there are non. The music fits the turmoil of the 1960s and that all familiar theme to return to conservatism even though Wallace was a third party candidate.

No racial remarks in these songs, what a relief !

No info found on the artist, but he recorded at least another single as his "Sinner's Fate" has been compiled on Small Town country - Vol. 1. 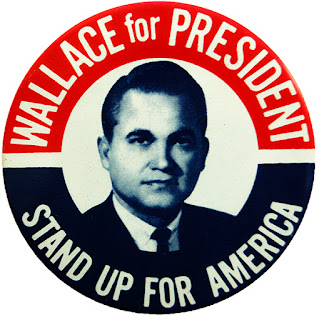 George Wallace, Conservative governor of Alabama, ran for President in the 1968 election as the American Independent Party candidate,

"George Wallace forged an alliance with many country singers, such as Autry Inman, Hank Snow, and the Wilburn Brothers, who participated often in his campaigns for the Alabama governorship and for the presidency.  Racism was certainly one factor which contributed to Wallace's popularity, but his southern rural/populist roots also made him appealing to many of the "good old boys and girls" who picked guitars and sang.  Wallace identified with country music, but he also spoke the same language, ate the same food, and responded to the same cultural traditions (both good and bad) that most country musicians understood.  He linked his southerness with their own, while also tapping vaguely understood, but often legitimate, feelings of alienation that many Americans everywhere felt.

The George Wallace-country music alliance was a major factor which contributed to the music's rediscovery by the media - the belief that at worst the music represented reactionary and racist politics, or that at best it spoke for alienated American working people."