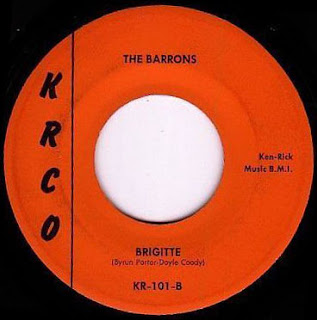 Quite probably a Beaumont, Texas group.  Composers of the songs, Byrun Portor (?) and Doyle Coody, were possibly members of The Barrons.

Vocal with a Bo Diddley rhythm. This is by far their best track for my taste.  All their other songs are in a doo-woopish vein.  The KRCo single was leased (or sold) to Westminster Records, a budget record company and issued later that year in 1959 on their Whitehall subsidiary.

On the 10-tracks album, apart the two "4 Seasons" songs, The Barrons are credited on eight songs.
But only four tracks are really by "our" Barrons.  The four other Barrons tracks are actually by The Crescendos, the Nasco recording artists (track 2, 3, 4 and 6).

KRCo (Ken Ritter Company) was owned by the nephew of the cowboy star Tex Ritter.  During his stint in the military, Ken Ritter worked in Armed Forces Radio, and upon returning to Beaumont affiliated with Broadcast Music, Inc. (BMI).   In 1956, he was granted the first music-publishing license here, and at the time it was among the earliest in the state.  In 1958, his first major success came when he co-produced the recording that took J.P. Big Bopper Richardson to national fame. With two novelty songs back to back, the Chantilly Lace side became a huge hit and sold in the millions.  He also discovered the talents of brothers Johnny and Edgar Winter of Beaumont and produced some of their early recordings.   Ken Ritter was elected mayor of Beaumont in 1970.