Gonna Put You Down 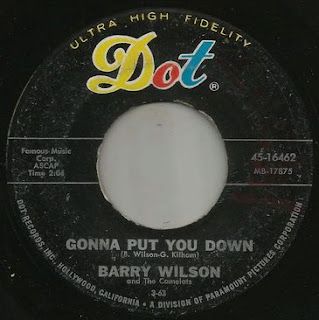 Barry Wilson
and The Camelots

Gonna Put You Down

On this record, an article published by Billboard (in its April 20, 1963 issue) has the following details :

BUG ON WING IN N. ENGLAND

BOSTON - Out of a new dance known as the Bug has come a new record produced by the sales representative of highbrow music radio station WCRB, which will, of course, not air his record.

It grew out of a new twist dance popularized in this area by the trio of Barry Wilson, Bob Prunier and Mo Burnham.  Gene Kilham of WCRB produced the record, had it published by Famous Music Corporation, New York and sold to Dot.  "The Bug" is backed with "Gonna Put You Down."

The group was backed by four Framingham businessmen who were instrumental in getting the trio started on the dance in the Camelot Lounge in Framingham.  The dance is now spreading to other parts of the country and is popular in New England areas.

Barry Wilson led several local bands The Orchids, among others, and was the vocalist of The Lundon Fog (until 1973).