King Of The Blues 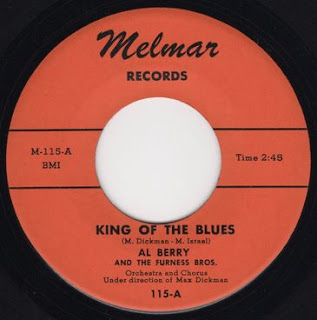 Al Berry
and The Furness Bros.

Only "featured" on the previous record on the same label — Furness Brothers Featuring Al Berry — Al Berry is promoted here as the main artist.  He was a member of the New Furness Brothers at least until the early sixties.

Businessman and songwriter Max Dickman started the Melmar label in Broomall, Pennsylvania, named after his son, Melvin, and his wife, Marilyn.  The first three releases on the label were by Bonnie Davis & The Piccadilly Pipers [See Marv Goldberg's website HERE)
Posted by Bob at 12:28 PM