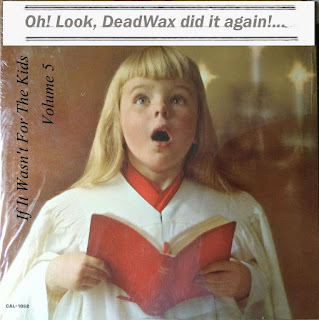 "Another batch of twelve tracks by junior performers"


From the Signal Pictures' Tomboy & The Champ. Jerry Naill found his true calling early in his life.. He discovered music as a child and was cast in the 1961 movie “Tomboy And The Champ”. Not only did Jerry have a singing part in the film, but he also had the opportunity to record six songs for the movie’s soundtrack.  A single released at that occasion paired "Barbecue Rock" and "Love Valley".

"Barbecue Rock" was penned by Elsie Wilks, owner of Hitt Records out of Baytown, Texas.


Six year old singer and fiddler from Jonesboro, Arkansas. La-Konya Smithee was just six years old, but she was well on her way.  Fiddling and singing, the vivacious tot had landed a cast membership on the Memphis Grand Youth Opry show.  Mama Billie Smithee was never far away. "Little La-Konya won't be new much longer: Charlie Daniels has promised to put her on his Volunteer Jam, according to an article published by The Tennessean from Nashville in June 1983.


Lena Hilda Zavaroni, a British child star, born on November 4, 1963, was discovered at the age of ten by winning a British TV talent hunt. Died of anorexia on October 1, 1999.

Her parents were The Zavaronis, who hailed from Genoa, father was an accordionist, her mother was a singer. They owned ‘Zavaroni’s’, a fish and chip café in Rothesay town in the Isle of Bute, Scotland.


Maria Sacco, a 12-year-old recording artist from Canonsburg, Pennsylvania, was a student of the Vella School of Dancing, and 7th grader at St. Patrick's School when she recorded her single for Rene, a label established by Charles Edward Edwin, better known as Chuck Edwards, who had been recording in the fifties for labels such as Duke, Apollo and Alanna.


Patricia Lynne Honeycutt was the eleven year old daughter of Cecil & Amy Honeycutt, who formed The Gospel Enlightness, a gospel family group from Indiana. This is from their Cabut Recording Co album pressed in 1969 by Rite Records. Label based in Shelby, Ohio.


From the movie The Littlest Rebel.

Shirley Temple (1928-2014) Everybody knows her as the most famous child star in the 1930s. Shirley could do it all: act, sing and dance and all at the age of five! Four years in a row, between 1935 and 1938, she was the top box-office draw for Hollywood. As an adult, she entered politics and became a diplomat, serving as United States Ambassador to Ghana and later to Czechoslovakia.  Temple began her film career in 1932 at the age of three.   She died in 2014 in Woodside, California.


2 Year Old Brenda and 4 Year Old Brian MacMurray. From the album The Singing McMurrays "Jesus Is Coming Soon", a private recording pressed by Rite Records in 1972. Pastor McMurray and his wife and his two young children were from Federal Way (Washington).  The good news here is that the song is clocking in just under fifty seconds.


In 1999, The Little Stinkers, fronted by seven-year-old Mary Beltrami, fanned the winds of Christmas with I Farted on Santa's Lap (Now Christmas is Going to Stink for Me).

On their way home from a family vacation at the beach with a carload of kids, Gina Beltrami turned to her husband, Tony, and said, "Wouldn't 'I Farted on Santa's Lap' be a great title for a Christmas song?" To fight the boredom of the long drive, they began tossing out funny lines, and by the time they pulled into their driveway, they had written a hilarious Christmas song. Eventually, Tony sat down at the piano and put together music to accompany the lyrics. The song became a family holiday standard.

One year, Gina decided to book some time at a local studio to record the song to give to friends as Christmas presents. On the day of the recording, Gina and Tony enlisted their 7 year-old daughter, Mary, their son Anthony, their nieces, Hannah and Emily, and friends Olivia and Lauren to sing "I Farted on Santa's Lap," and The Little Stinkers were born.

The recording was such a hit with family and friends that Gina decided to bring it to local D.J., Ken Matthews, at WAEB-FM/B-104 in Allentown, PA...


The seven Rhodes Kids were the children of an Exxon engineer and a concert pianist, and had already been playing together casually before relocating to Houston in 1970. Soon they were performing at the Las Vegas Hilton alongside Elvis and B.B. King, appearing on Jack Paar and Michael Douglas' TV shows, gigging on American Bandstand and in a Walt Disney World special, and hobnobbing with Wayne Newton and Sammy Davis, Jr. The family group released 4 LPs and 7 singles between 1972-75.

Land of 1000 Dances is from a live recording found at Youtube. This is probably from a July 4, 1974 two-hour concert presented by General Recording Corporation (GRC). The concert, held at Central City Park, was broadcasted live by Atlanta's WSB-TV. The Rhodes Kids were one of three acts featured that day.


From the album "Aunt Bertha Presents Singtime" (Diadem DLP-268, Grand Rapids, Michigan). Main singer on the album is seven-years old Little Lady Linda, about who Aunt Bertha is giving details, but she has only few words about Calvin : "tiny tots Calvin [and Rachel] add sparkle in their winsome way."


From The Humbards privately pressed album "Suppertime". The 4 year old twins Drusilla & Susanna are the daughters of Rex Humbard and Maud Aimee, television evangelists of the Cathedral of Tomorrow programme, from Youngstown, Ohio. Humbard was Elvis’s favourite preacher.


From the album Little seven year old Judy Adams sings for the little girls and boys, backed by Gordon Sizemore on guitar.  On the Process label, out of Franklin, Pennsylvania.