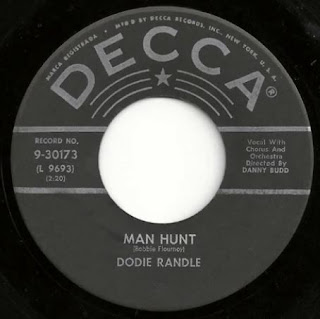 
I Fell in Love Again

Her only known single.  But she has been more active as a songwriter, as Dodie Randle but also as Bobbie Flournoy, Roberta Jiroudek or Dixie Philpott.
Patsy Cline has recorded at least one of her song : I Cried All The Way To The Altar.   How Do You Learn to Love? written with Ray Whitaker and Dolores Hampton was sung by Barbara Bostock in the Universal Pictures "Girls On The Loose" (1957).   "Kiss Me Hello (But Never Goodbye)" was recorded by Ginny Greer for Decca Records (1957).
Dodie Randle was also involved with the earliest known records of Nooney Rickett in 1959/1960 : Heaven On Earth (MGM Records) and The Bowling Song / How Now Brown Cow? on the Know label (a record by the way she also produced – her only production as far as I know).

https://www.mediafire.com/file/hv632azr0edwd0y/Dodie_Randle.7z/fileThe Dodie Randle zipped file below includes her two Decca sides, plus the Barbara Bostock track, The Bowling Song and Heaven On Earth (both by Nooney Rickett)