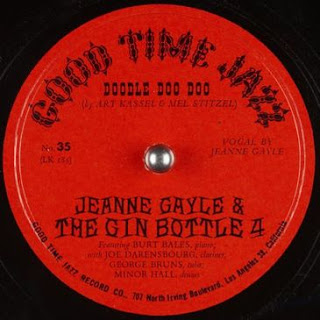 Born Martha M. McBride in Montana in 1914.  Martha was one of the “McBride Sisters” famous 1930’s Portland singing trio heard on network radio. Other McBride Sisters were Virginia, born in 1913 in South Dakota and Hazel McBride, born in Timberlake, South Dakota in 1915.

Martha married in 1940 George Edward Bruns, a musician. They had met while performing. Her solo stage name was then Jean Porter. George would become KEX Musical Director in the 1940's and they would move to Los Angeles about 1950, craving a bigger music scene than Portland could offer.  George played tuba in a jazz band (you heard that right, tuba and jazz in the same sentence), created a night club act with his wife.  Jean Porter would record for Capitol Records as Jeanne Gayle.  In 1953, George was asked to write the music for a short over at United Productions of America, Little Boy with a Big Horn. His work was impressive enough to grab some attention over at the Walt Disney Studio and he was hired the same year to arrange Tchaikovsky’s ballet music and write new score for the upcoming feature Sleeping Beauty and becoming the studios Musical Director in 1959, co-writing hit songs like The Balled of Davy Crockett. Martha recorded for Disney records as well.