The Centurys on Mark C 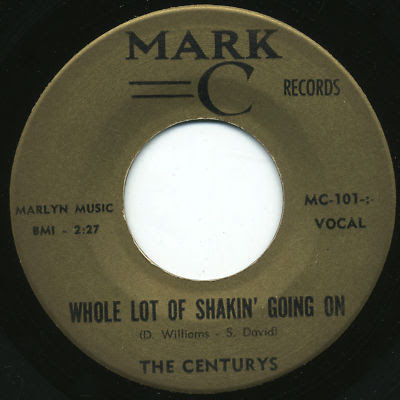 Whole Lot of Shakin' Going On

"The Centurys" started in 1963 at Alamo Heights High School at the annual Howdy Night Fiesta. Tony Volz and Bill Bellamy had taken guitar lessons at Caldwell Music Co. from Ed Fest over the summer. Tony had a National fat body electric guitar and I had a Fender 3/4 Musicmaster solid body. We shared a Silvertone Twin Twelve Amplifier with reverb and tremolo. Our passion was instrumentals by The Ventures and Freddy King. So we played almost unnoticed at Howdy Night as the music of choice then was country western and the best band was Peyton Starr and The Drifters featuring Johnny Witherspoon. One fellow noticed, a different kind of guy from New York with Brylcream hair named Pat Wellberg. He asked if he could sit in and produced a white Fender Stratocaster with an Ampeg fliptop amplifier. What proceeded was an outrageous version of Gandy Dancer by The Ventures executed with flawless double picking. We recruited Pat instantly and a fellow nearby said he was Jimmy Taylor and could play drums. Jim had a white pearl Ludwig set and could play Wipeout. Pat's brother, Ed had played with Joey Dee and The Starlighters at the Peppermint Lounge in NY. Remember the Peppermint Twist? Ed told us at practice that we'd be more professional if we did steps (choreography) And wore black and gold lamme tux jackets which he happened to have. So we did.

In 1966, with the departure of Tony Volz, they changed name and were The Pandas, recording one single on Swingtime Records.