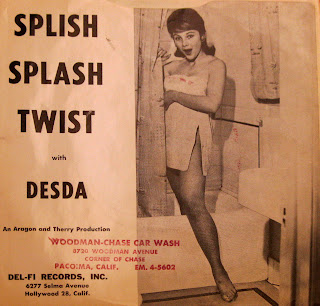 Co-producer Aragon is Johnny Aragon who had at least 3 "teen" records on Airlok (re-issued on 20th Fox), Dondee and Sound-O-Rama.
Other producer is Nick Therry.  Nick wrote the lyrics of "Too Soon" which was sung by Duke Mitchell (uncredited) in the movie "Bela Lugosi Meets a Brooklyn Gorilla" (1952).   He recorded for Spin-It Records in the mid-fifties, a label he co-owned in Hollywood with Eddie LeBaron.  And in 1956, he was doing some promotion for Bill Haley in the West Coast.

But who was Desda ?