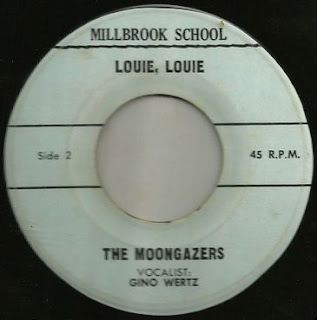 Not the worst cover of this classic garage song.  The Moongazers were a school band from Millbrook School in the New York State, a private school located in Dutchess County, New York, (county seat is Poughkeepsie). Rufus Wainwright attended this school which was later the inspiration for one of his songs.

Pete Hazzard   wrote his first compositions, The Horses' Hooves, and Evening Song, for violin and piano at the age of eight. He played violin studying in New York with Arlie Furman, and was a member of the New York Young People’s Orchestra. He also played guitar, and piano in both orchestras and dance bands throughout his youth. After graduation from Millbrook School and two years of study at Boston University, Mr. Hazzard entered the Berklee College of Music in 1968, receiving his Bachelor of Music in Composition in 1971.