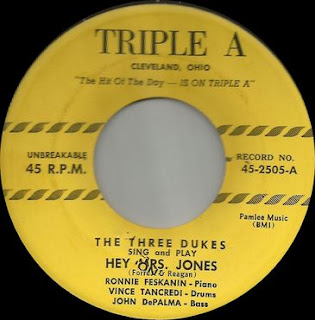 Cleveland, Ohio young jazz trio "The Three Dukes" were one of the first groups to cover the Jimmy Forrest song recorded in 1952 for United Records. Members of The Three Dukes were Vincent Tancredi (drums), Ronnie Feskanin (piano) and John DiPalma (bass).  The Three Duke's recording of "Hey Mrs. Jones" was pressed for Jack Gale's Triple A Records.  The new release was Triple A's debut in R & B and was considered a "good version of the lively tune now riding high" according to Billboard reviewed somewhere in the Rhythm & Blues section between new records by Edna McGriff (Why, Oh Why on Jubilee Records) and Hadda Brooks (When I Leave the World Behind, Okeh Records) on February 28 1953.  The reviewer also noted that "Coverage platter is rather late and will have a difficult time catching much coin"

The trio broke up soon after.

More versions of the song in my next post