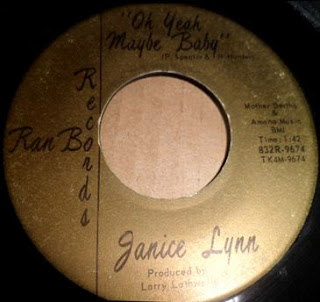 Janice Lynn
If I Could Tell You
Oh Yeah Maybe Baby

Ran Bo Records
RCA custom pressing, 1966
Producer : Larry Lathwell
Another obscurity, probably from Ohio (?), that's my guess, only based on the fact that Larry Lathwell has two of his songs recorded by Lee Rand on Destiny Records, a Lorain, Ohio label in 1967.

If I Could Tell You, was written by Idabelle Firestone, wife of the industrialist Harvey Firestone. An accomplished songwriter, she composed "If I Could Tell You" as the opening theme for the radio, and later television, music program The Voice of Firestone. The show was sponsored by her husband's company, Firestone Tires.  "If I Could Tell You" became very popular and was recorded many times. It is most identified with the singers Richard Crooks and Eleanor Steber, who served as frequent hosts on the Firestone program in the 1940s and 1950s, respectively. [Wikipedia]