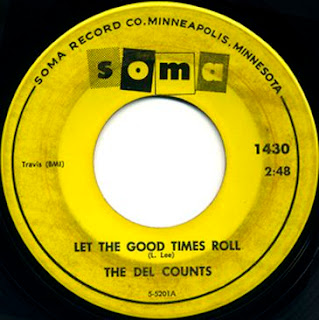 The Del Counts were started by Charles Schoen, who was inspired to start a career in music after learning to play the guitar while he recovered from a serious injury.  He named the band after his first drummer, Del Leon LaFave. "We were called the Del Counts from the start," Schoen said. "Del counted the songs — funny how that came about."
Soon, Tony Preese replaced LaFave on drums Bill Soley played bass and Tom Aspenwall was the guitarist..

The band’s breakout song, “Let the Good Times Roll,” was released in 1965 and caught the attention of listeners. When the song was first released, it became an cue for local gangs to start brawling on the dance floor when the chorus began. The band realized that they may need to hide behind their equipment while performing the song to avoid injury.

In 2019, Governor Tim Walz has declared Friday, April 26, Del Counts Band Day, as the band celebrate with a 58th anniversary show. The Del Counts, who have been performing since 1961 and are widely considered the longest-running rock group in the state, continue to play shows decades later to nostalgic followers.