Sonya and the Avons sing for Riceland Rice 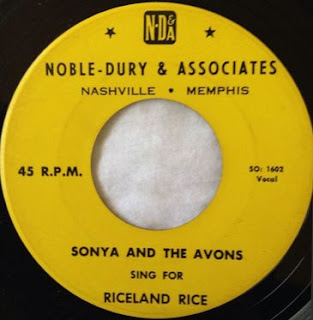 Sonya and the Avons
sing for
Riceland Rice

Pressed by Southern ¨Plastics in Nashville in 1964. A promotional record for Riceland, a company founded in 1921 with headquarters in Stuttgart, Arkansas.

Produced by Noble-Dury, a nationally known advertising and public relations firm. Noble-Dury reigned supreme for a 30-year period that spanned from the 1940s to the mid-1970s. The agency is widely regarded as the most successful ad firm in Nashville’s business history, and for a time, it even ranked as the largest agency in the Southeast. Noble-Dury represented leading national and regional consumer brands, as well as banks and insurance companies, but the firm’s reputation and fortunes largely hinged on relationships with Kentucky Fried Chicken and Pizza Hut.

Les Beasley (of The Florida Boys gospel group) and Jan Doughten (or Jane Dowden?), vice president of Noble Dury, developed and co-produced the television show Gospel Singing Jubilee, an hour-long television program hosted by the Florida Boys that featured a number of other Southern gospel groups as guests.  The Gospel Singing Jubilee, which became the most watched gospel program on television, began in 1964 on a Sunday morning . The show ran for twenty-five years.

Backing Sonya, the lead singer, are certainly The Avons, whose first taste of the studio was an initial one-off hire for budget label Hit, providing uncredited backing vocals to Peggy Gaines’ cover of The Marvelettes’ “Playboy” (Hit 17).  Much more info on The Avons by E. Mark Windle here

I'm fairly confident that this is the same Sonya of Sonya & the Capris on Scarlet (1959) and Sonya (alone) on Dot (two singles in 1961 and 1962 and also (why not?) Sonya And The Sensations (Dont Feel Like The Lone Ranger) On Gend (1963)
May the new year bring me some info about the mysterious Sonya and (am I asking too much?) a picture of her...