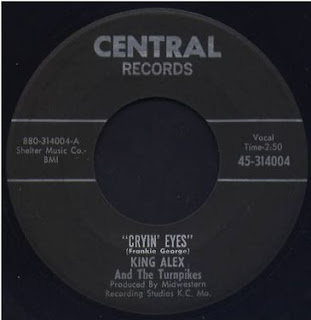 King Alex And The Turnpikes

Central 45-314004
1963?
The label gave writer's credits to Frankie George, owner of the Black Orchid.. According to King Alex,  "He was just a club owner. He didn't write no songs and he didn't play no music. He helped me produce the record, but I wrote it."

"King-Alex" (Alex Littlejohn) was born July 29, 1934 and passed away March 15, 2008. He performed at local venues, regional and national blues and jazz festivals. He performed with the late Tommy Soul, Lester "Wizard" King, Albert Collins, B.B. King, Jerry Lee Lewis, Lawrence Wright and the Outlets, Leon Estelle, "Little-Joe" Robinson and Claude "Fiddler" Williams - just to name a few. Williams and formal training at UMKC's Conservatory of Music helped Alex refine his ability to play the bass. He was the first African-American bassist to play an electric bass in Kansas City through the Conservatory. Provine "Little" Hatch, George Jackson and many others performed with King-Alex at area venues to include Club Paradox, Mack's Tavern, Kansas City Blues and Jazz Festival, and the Epicurean. He has several recordings to his credit to include Hot as a Coffee Pot, Huchia-Cuthia Lovin' Man, Sweet Banana Pie, Little Girl from New Orleans, and Grinding Stone.

Littlejohn was inducted into the Elder Statesmen of Kansas City Jazz in 2002 along with former employer and life-long friend Richard "Dick" Berkley.
Central Records was a subsidiary of Shelter Music, which was a subsidiary of Midwestern Recorders. All three owned by Gene Smith, who was also manager of the World War II Memorial building;