I Will Forgive You (But I Can't Forget) 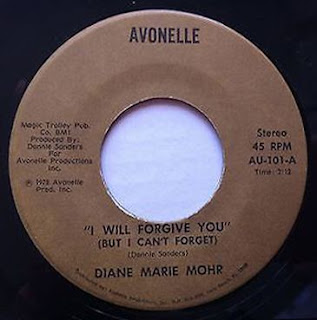 I Will Forgive You (But I Can't Forget)

Vero Beach, Florida drummer Diane Marie Mohr,  31-year old in 1978, has been drumming and singing the previous year at Rick's Dugout Lounge with the Glenn Shell Trio.. She started playing drums at age 14. Three years later, she was, providing the.beat for such name acts as Bobby Vinton, Anita Bryant and the Tokens. "1 was In a band in Louisville and we played at a benefit concert with some big singers," Miss Mohr said., "The Tokens even, asked me to join' them because it would have been pretty unusual, for a chick to be in the band. But Mom and,. Dad said no way. l wasn't even out of high school, yet," Instead, she continued taking drum lessons throughout high school.

The record was financed by Avonelle Call, who acted as her sponsor. "We have an agreement that if I ever hit it big, she'll get 10 per cent. Actually, she's just a close friend. who doesn't know anything about music. She thinks I just deserve a shot..."