Whisper To Me Baby 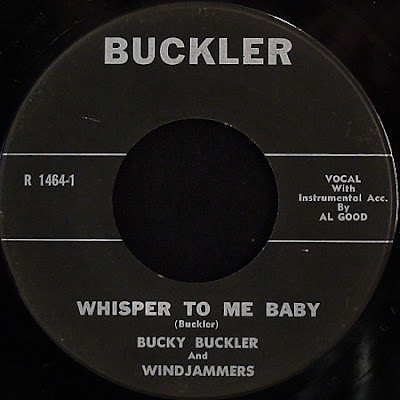 Whisper To Me Baby

Managed by Hollywood agent Bobby Boyd, Bucky Buckler was in Nashville in December 1959, recording at the RCA Victor Studio. "Whisper To Me Baby" was likely recorded at this session. Mention is made in Billboard Magazine (Feb. 3, 1962) that Bucky Buckler is a new artist on the roster of the Tillman Franks Enterprises, Shreveport, La. , at one time the youngest member of the Oklahoma Legislature. (Seminole County, 1957 and 1959 Legislatures).

Bucky lost his mother in 1988 in unfortunate circumstances :

James M. " Bucky " Buckler, 58, was jailed on a murder complaint Wednesday after he walked into the sheriff's office and confessed to the killing of Verta M. Buckler , Abel said.

Bucky admitted strangling his mother after enduring "a lifetime of abuse". As he choked his mother to death, Bucky cried out, "Will it never end?", testified the sheriff's deputy.