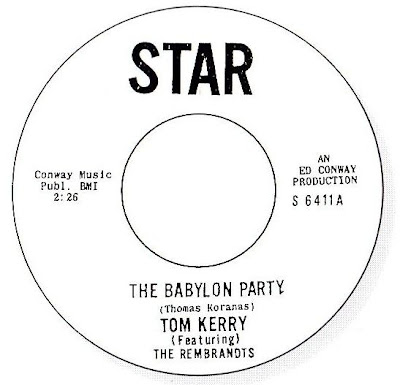 
Listed in Rockin' Country Style, this record is one of the 350, or so, labels listed by Terry Gordon without any information on their location.   On RCS, the title is listed as "The Babylon Twist Party".  But the correct title is probably "The Babylon Twist". Anyhow, that's exactly how the song was copyrighted by Thomas Stephen Koranas on May 19, 1964, the same day as "This Christmas", which is possibly the song on the flipside.

The black and white label shot above is from the booklet of "Compated Cats" (a CD on the Cees Klop's Collector label).  The picture seems to have been "doctored".   Perhaps Mr. Klop has developped a hypersensitivity disorder of the immune system known as twistosis, which is reputedly hitting frequently the aficionados of the "true rock'n'roll".


The label was one of the subsidiaries of Celtic Recording Productions ["The Ultimate In Barbershop Sound", says a musical program from 1964],   a company owned by band leader Ed Conway and located at  2403 Stewart Avenue.  Westbury, N.Y. (Long Island).   Other labels formed by Celtic Recording Productions were Starfire (artists : Carol Thomas, Mark Jackson), Ebbtide (artists : Nicky Dee and Billy Clanton) and, in 1967,  Dottie Records.

The most interesting information that I've found is related to the artist, Tom Kerry, whose real name was Thomas Stephen (or Stephan?)  Koronas.

According to his daughter, Lynda Kerry Rakers :

My father was , born in Brooklyn, and he was a self taught artist, He explored all types of art, as he had many jobs restoring all types of artwork (impressionism,abstract,realism) He liked the artists Andrew Wyeth and Norman Rockwell and many of the old masters, he loved doing fine art realism the most even though it took the most time(to put all the fine detail in)  Not many people know how great a singer he was ,he sang with a swing band on the side .   He loved singing as much as he loved to paint .   He was a true artist in every sense of the word. He settled in Long Island and started painting a lot of broken barns he would come by.   He also liked to paint still life's, children.   I really don't know what else you might want to know he was in the navy ,and some called him Rembrandt (he drew portraits for the guys and caricatures) and some called him Elvis(because he would sing and entertain them ) he died in April 1983 at the age of 54. 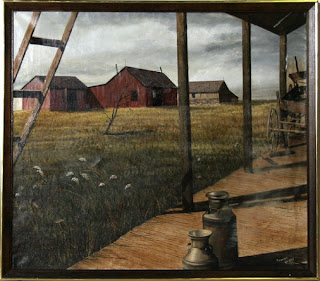 Lynda Kerry, again,  has also a rather moving story regarding how one of a song penned by her father,  "The With Doctor", was a little more than an inspiration for David Seville, aka Ross Bagdasarian, Sr. [full text quoted] :

When I was a young girl, around six or seven, I recall my father taking me to, what I believe to have been, The Brill Building in New York City. My father had several songs with him that he had written, one of them called "The Witch Doctor". I recall a man inviting Dad into a room with an upright piano, the room is a blur to me, now, but I recall warm lighting and wood paneling. They closed the door while I sat outside the door, listening to Dad's songs being played on the piano, with Dad explaining to the man how he "speeds up a tape" to make a funny-sounding voice for the "Witch Doctor" character. When they emerged, I will never forget the perplexed, hurt, look on my father’s face as the man said “Sorry, it is an interesting sound, but I can’t use it, it will never sell records…”.


The day he brought that song to NYC was one of the saddest days of my life. But, for my father, the sadness turned to anger as a short time later, he heard the song on the radio! Not only had his song been stolen, but the idea to speed up a tape to make a crazy voice was blatantly used! After the song became a hit, we saw “David Seville” on a TV show. We recognized him, immediately, as Ross Bagdasarian, Sr., the man who listened to my father’s songs, only a few months prior to our hearing “The Witch Doctor” on the radio!

My father’s friends urged him to file a law suit against Bagdasarian. However, Dad’s take on the situation was one of confidence in the fact that he still had his talent, no one could take that from him and that he would prosper in the long run. He did go on to become prominent Long Island artist, Thomas Kerry. His multi-talent spanned the world of art, music and comedy. Today, 30 years after his death, you can “Google” him in, at least, two of those genres. Under the name “Thomas Kerry”, you can view his phenomenal Americana oil paintings. If you enter “Tom Kerry” or “Tom Kerry and the Rembrandts”, you will come across his recording of a song he wrote, “The Babylon Twist”(he also, sang and played guitar on this recording). Unfortunately, the world will never know Dad as the great comedian he was. I can’t help but feel if he had gotten the credit he deserved for “Witch Doctor” his life would have been much different and a lot easier.

After reading an article about Oprah Winfrey and how she sued someone for trying to take credit for her catch-phrase “AH- HA moment”, I realized that it doesn’t matter how much money or fame a person has when it comes to credit entitlement. The fact of the matter is, my father was the true creator of an idea that spawned a billion-dollar dynasty and I intend to set the record straight whenever and wherever I can. I intend to persist until the truth is known publicly. I know my father was the true writer of this song...I was there!!

One of the songs Tom Kerry wrote in 1958 (and one I'd like to hear) is a "The Little Fat Eskimo", a song he wrote with Grace, his wife.