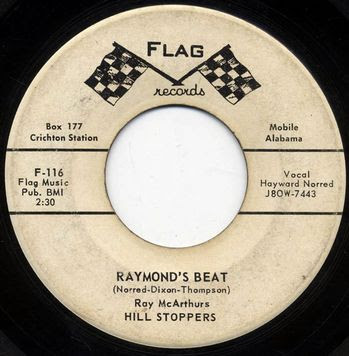 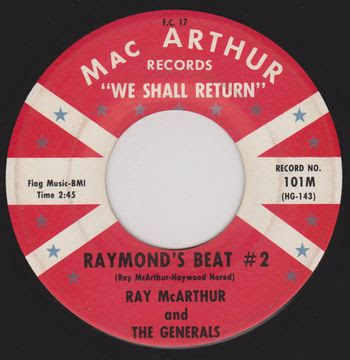 Ray McArthur and the Generals

Sax player Ray McArthur was one of The Escorts on Judd Records (#1014 : My First Year / Clap Happy, 1959).   Afterwards The Escorts backed guitarist Wade Cagle on Sun Records (4 songs recorded in 1960 in Memphis, two released in 1961 on Sun 360).  It is said that the Escorts were from Pensacola, Florida.

In 1961, there was a much obscure release on Q-T Records as by Ray McArthur and His Generals, pressed by Rite Records :  Come Back Baby / Irish Rock,  possibly a second issue or unissued Flag recordings from 1959 ?

In 1962, Ray McArthur launched his own Mac Arthur label ( "We Shall Return" says the label).  Second release on the label was Conner Cagle with the Generals.( see the Calico Wall )

The Mac Arthur label was probably out of Georgia,  based of the initials HG printed on label.  Master identification letters HG stands for the mysterious Harry Gorlin,  owner of the Druid publishing company (BMI) and almost certainly also owner of Trumpet Records  (P.O. Box 62, Atlanta, Georgia).  His initials, probably indicating the ownership of the masters, are found on a number of tiny Georgia labels such Lyon, Lenox, Shane, Young and also indeed on Trumpet.

Perhaps, I wonder,  Mr Gorlin was the theater agent who posted the following ad from the same P.O. Box 62 in Atlanta in 1953  :

GIRL TO WORK WITH A LARGE, SAFE  snake in act in theaters. Experienced or not experienced.  Salary and expenses. Tour starts March.  Send photograph and particulars.
Billboard, March 7, 1953