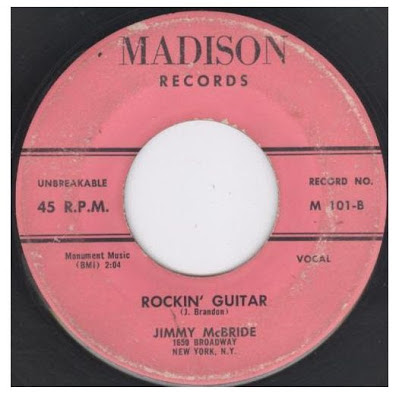 The initial release on the label.

Nothing is known of Jimmy McBride.

The song is from the pen of Brit Johnny Brandon, aka (in the UK) as The King of Zing who, in the early 1950s pre-rock ’n roll days, was the British heart-throb with countless radio, television and personal appearances across the country.  Apart from singing Johnny also composed songs for the likes of Jessie Matthews and Vera Lynn.   He starred in hit West End musical “Love from Judy” and made the Top Ten charts with his self-penned “Tomorrow”.

Wanting to achieve more, Johnny emigrated to New York in the mid-1950s with his life-long partner Robert Richardson.   In the States, he slowed down his singing career and got involved in record production and wrote musicals.  Notable off-Broadway successes include “Billy No-Name” and “Cindy”.

Madison Records owner,   Larry Uttal, owned and operated several record labels (Bell, Amy, Mala, Private Stock) in the sixties and seventies.  He folded Private Stock in 1978, moved to London and entered the film business. On his return to New York, he entered the travel business.  Mr. Uttal was active in the Gay Men's Health Crisis and the National Gay and Lesbian Caucus.   He died of AIDS in November 1993.   He was 71.