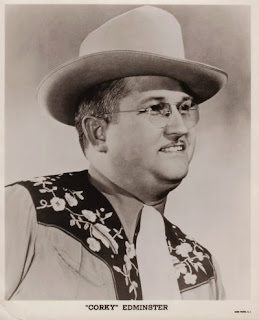 Mr. Edminster was born Feb. 16, 1916, in Wichita. As a boy, he attended Roosevelt Junior High School and was a graduate of Wichita High School, now East High School,where he was an honor student.

By 16, he was playing with Wichita bandleader Gage Brewer. In addition, Mr. Edminster studied music at Friends Conservatory of Music.

“He was trained classically and when times were hard, he could get jobs as a piano man,” said one of his daughters, Peggy Moore of Edgerton. “He could play and read music. He could transpose. When vocalists needed something in a certain key, he had the ability to transpose the music quickly.”

During the 1930s , Mr. Edminster’s band, the Ark Valley Boys, performed on KFH, Wichita’s first radio station. That was in the days when the Lassen boasted that it was "Kansas’ Finest Hotel." The station, a one-time tenant on an upper floor, took its call letters from the hotel’s slogan.

During World War II, Mr. Edminster played in the U.S. Navy Band, where he was musical director and helped produce programs, Moore said.

After the war, Mr. Edminster’s band evolved into Corky’s Corral Gang and played on KANS radio. In 1952, they went to Hollywood, working with Gene Autry and his comic sidekick Smiley Burnette on a number of B-grade Westerns.

In later years, he was known throughout Wichita, where he played at the Candle Club and with the Dads of Dixieland.

When he wasn’t entertaining, Mr. Edminster was vice president of Shamrock Oil and Tire for 32 years.