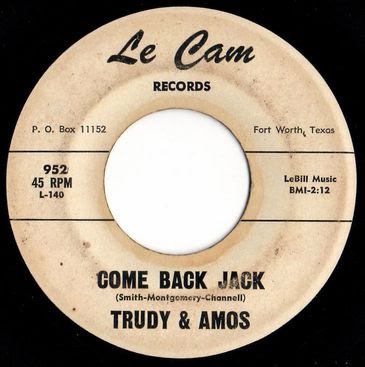 Unlisted Major Bill Smith production.  Other songwriters are Marvin Montgomery and Bruce Channel.  This was possibly recorded with the same personnel on "Hey Baby" issued by Bruce Channel on Le Cam 953, the label's following release.

Amos is Amos Milburn, Jr. who had several singles on the label.  But who is Trudy ?
There is very few black artists named Trudy.   My best (and only) guess is that she is Trudy Williams who was previously one of The Six Teens, a successful Flip Records group.   Does anyone know any better ?