Her Name Is Geraldine 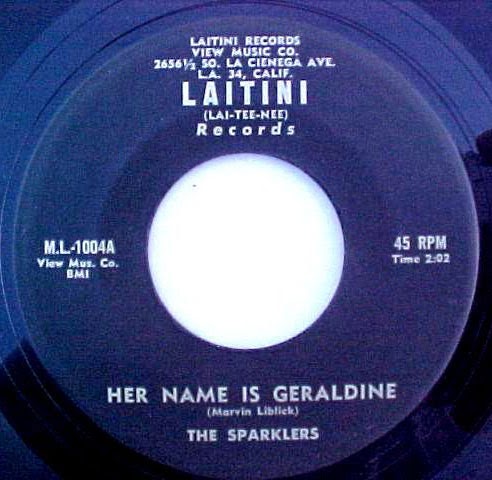 Likely owned by Marvin Liblick who is the songwriter credited on every song issued by the label with only one exception :  "Cherish My Love" by The Glens (later re-issued by Sudden Records)

Marvin Liblick frequently recorded the same song by different artists.  For instance, "That's My Baby" was recorded by Jerri Shaw and by Betty Stewart.  Probably not satisfied by the result, Marvin Liblick (backed by the Darts) recorded it again in 1961 for Mastersound,a label he also probably owned.


Marv Liblick also dabbled in the commercial jingle songwriting.  Several copyright were filled in the mid-fifties for songs such as "Doctor Pepper's The Drink For You",  Manischewitz Is The Wine For You", Coca Cola's The Drink For You (also known as We' Re The Boys Of The Film Industry), Cadillac Is The Car For You,  Brigley's Gum Is The Gum For You, Standard Shoes Are The Shoes For You and Lucky Lager's The Beer For You. ...

At the very same address on La Cienega Avenue that was once the headquarters of the tiny Laitini Records you can find today Robin Zodiac and her Psychic Domain ("Soulful Healing through an Accurate Telephone Reading").  One may wonder if she can help to find anything about this shoestring recording company.