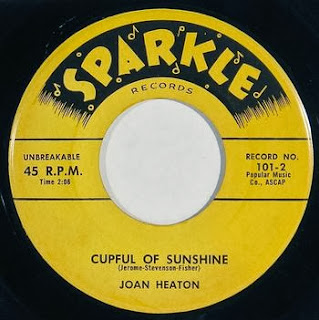 "Cupful of Sunshine" was first recorded by Jerry Jerome and his Orchestra for Keystone Broadcasting System, Inc. in 1945.


During the swing era, Jerry Jerome emerged as an excellent tenor saxophonist influenced a bit by Lester Young; he played with Glenn Miller, Benny Goodman and Artie Shaw.  He became a full-time studio musician, working as musical director at NBC during 1942-1946, spending a couple years as the head of A&R work at the Apollo and Keystone labels, and worked as musical director for WPIX-TV in New York.

Launched in 1941 with headquarters in New York and relocated to Chicago in 1948, Keystone Broadcasting System (KBS) remains an obscure entity from the annals of radio history.
This was a transcription service that provided enough recorded programming to fill 28 hours of radio airtime per week.  KBS had over 200 nationwide affiliates in 1943.