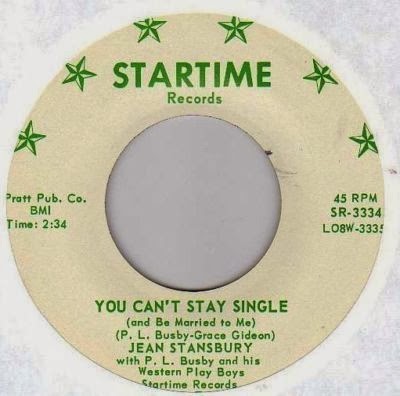 Jean Stansbury
with P.L. Busby and his Western Play Boys

You Can't Stay Single (And Be Married To Me)


Born around 1934, Abilean Jean Stansbury has been a member of The Brushcutters, the Shorty Underwood band who backed Slim Willet on "Don’t let The Stars Get In Your Eyes"  (4 Star Records #1614, 1952).  She previously recorded a duet with Slim for Star Talent Records (My Story's Sadder Than Yourn, Star Talent 780, 1951).

The Abilene Reporter (April 2, 1961) reported her release on Startime Records :


New Record Features Abilenian Jean Slansbury, 27-year old Abilene vocalist, has sung for the Vice President of the United States and is now  singing for the American public by way of a new record just released. They're country and western numbers, "Make Up Your Mind" and "You Can't Stay Single." ln case her name is unfamiliar, she's the blue- eyed blonde who sang the title song, "Kennedy Johnson," at Hose Field House last year at the fund-raising campaign for Vice President and Mrs. Johnson.  Mrs. Johnson personaly commended Jean for her singing at that time. Jean has been singing professionally since she was 10 years of age.  She also does a little guitar work when not utilizing her vocal chords. She has appeared locally with several country and western musical organizations. The Pratt Publishing Co. of Abilene has published the songs which were recorded for release by a Nashville, Tenn.. firm. The numbers were written by two Abilenians, P. L. Busby and Grace Gideon.


She appeared locally with several country and western bands, among others Bob Burks And His West Texas Wranglers (mid-sixties). 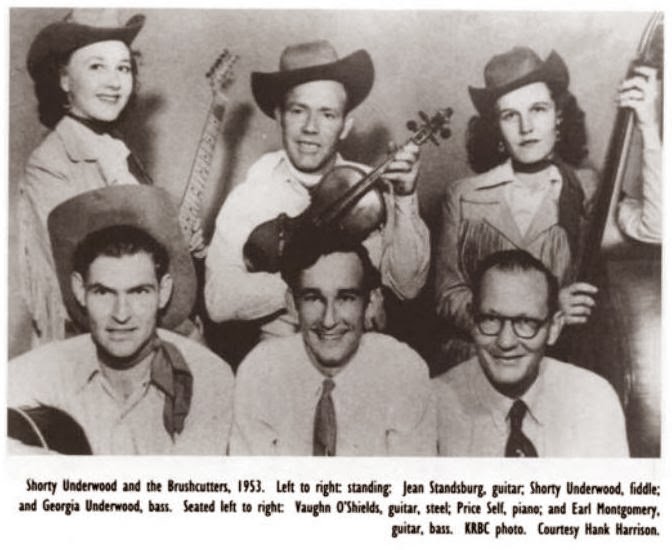 The Brushcutters (1953)
upper left :  Jean Stansbury (and not Standsburg)

Startime Records issued six singles in 1960 and 1961.  "Startime Records, Nashville, Tenn." is printed on most, but at least one had "Abilene, Texas".

Aside from the Startime label, Pratt Pub. Co. can be found on several Abilene recordings, such as Bluebonnet, Shenandoah and Royalty.  All were most likely recorded at the Beacon studios.  For a listing of these labels, see next post.