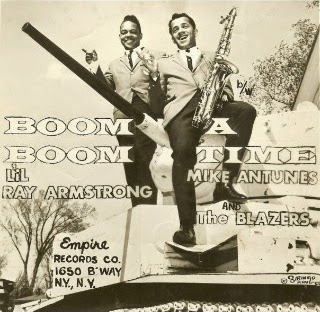 Produced by Jack Peters of F.G.G. Productions  (Bob Feldman, Jerry Goldstein and Richard Gottehrer)
Upstate New York band formed by Ray Armstrong, from Rome, New York, and  Mike Antunes (born in Dartmouth, Massachusetts). The "A" side is "Boom Boom" which they sang at almost every gig, and the "B" side is "A-Time" written just by Mike Antunes. The record never made it real big, but The Blazers were a big hit around Syracuse and  Ithica (Upstate New York).   Mike Antunes, the sax player, and Bill McCool (bass) were in the Air Force.   The Blazers, at one time, had a steady Sunday night gig at Zito"s Hacienda. They would change members due to the fact the guys in the Air Force would get transfered in and out of Griffiss (Air Force base located in Rome).