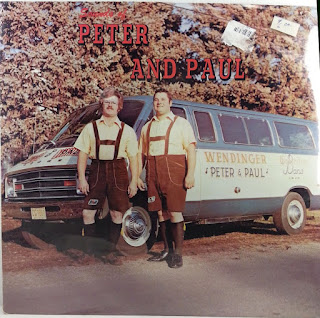 
Introducing the WENDINGER brothers... PETER is 25 and PAUL 23.  Each has his own farm by St. George, Mn., which is a little community between New Ulm and Gibbon, Mn.  They're active in running 400 acres of land and their livestock includes a herd of dairy cows and a beef herd.  Also, they raise and finish their own pigs and have on hand at least 500 hogs at all times.

The new Dodge van was added in May of 1974 and they travel to play mostly in a radius of 150 miles from New Ulm, but occasionally they go to North and South Dakota, Nebraska, Iowa and Wisconsin.

The WENDIGERS are especially known for playing at polka events throughout the upper midwest.  In 1974 alone they played at 15 polkas fests including the big one at the Gibbon Ballroom.  Everyone knows them for playing together with their two concertinas.  Both have a Hengel "C" and a Hengel "B flat" concertina.

This 4th album is intended to give listening enjoyment to concertina lovers and also to people who like the full band sound.  The first two albums were concertina solos and the third record was like this one with the concertina plus trumpets.

PETER and PAUL have found many friends in their years of playing and have played professionally since January of 1964. 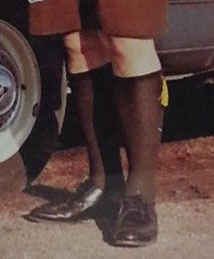 Footnote : Recorded at Cherrywood Studios, Cedar Falls, Iowa
Posted by Bob at 11:00 AM