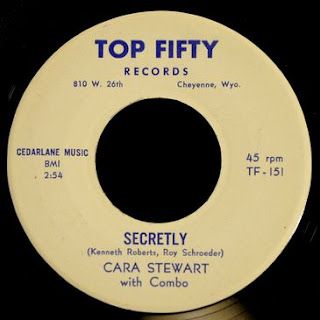 
Although his studio featured one of the classiest, most distinctive and most accomplished signature sounds in all of song-poemdom, the name of Lee Hudson is little-known today because he never had a label to call his own, instead placing the productions of his eponymous, Southern California-based studio with existing labels or for use as private demos. What attention the studio did receive was further diffused by Hudson's emphasis of the name of his lead singer, Cara Stewart, on labels and in ads, keeping his own name that much further in the background.

Not that he could be blamed, for Cara Stewart possessed the finest female voice in the entire song-poem field. Supported by Hudson's light guitar comping and a "5 piece ork" simulated on a Chamberlin, her sultry mezzo-soprano would have leveled cities-full of men, had any of them besides the respective songwriters ever heard her sing.   Stewart's torchy blues-pop style invokes comparisons to Julie London and Marilyn Monroe, only with a better instrument -- at least better vocal instrument -- at her disposal.