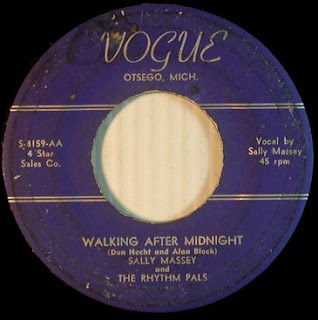 Sally Massey And The Rhythm Pals

"A very late cover of the hit tune by Patsy Cline.  A nice job by Miss Massey, but it arrives much too late"  Billboard 6 May 1957

In January 1957, Cline performed the song on an episode of the CBS television program, Arthur Godfrey's Talent Scouts. It garnered a strong response from viewers and was therefore rush-released as a single February 11, 1957. "Walkin' After Midnight" became Cline's first major hit single, reaching No. 2 on the Billboard country music chart and No. 12 on its pop chart. 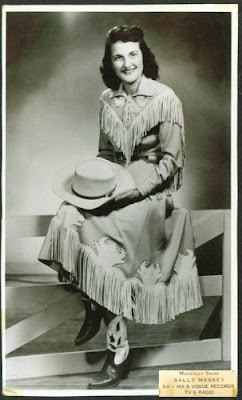 Born in 1922, Sally Massey in her younger days used to sing on local radio stations with her sister Alice .  Sally then played guitar in the Rem Wall Band before recording for her own Sa-Ma label. She had at least two 45s on the Otsego, Michigan Vogue label in 1956 and 1957. There was also a much later single on Sims Records in 1964.

She was once married to Gilbert Jennings, a fiddler and singer.  She died at an unknown date.