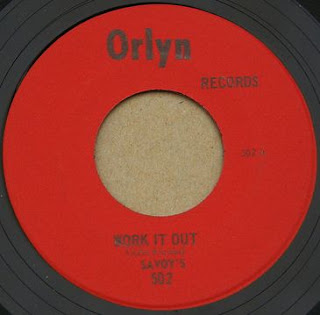 Work It Out
John Kluska


Band named after the Plymouth Savoy model they drove to gigs in.  (The Savoy model itself was named, like the Plaza and Belvedere models, after an upscale hotel, the Savoy Hotel in London).  They had at least another record on Summit Records (out of Harley, Illinois) : "Can It Be" / "Now She's Left Me", songs also written by John Kluska.

The Orlyn label were named after its owner Oren Stembel and his wife Marilyn. 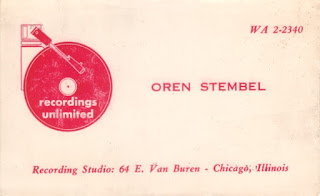 As one of the most intriguing and revered independent record labels from Chicago, Orlyn specialized in teenage garage-punk and psychedelic sounds.  The label existed from about 1965-1969 and it was an extension of the Records Unlimited Recording Studio located near Wabash and Lake Streets in downtown Chicago.

Gary Knaus, Graf Zepplin's rhythm guitarist, who recorded there in May 1968, recalls  :

The studio was quite an interesting place.  As I recall, Orie Stembel,
who ran the studio, was a cigar chomping bald headed guy with a
diamond pinkie.  He had a guy who did the mixing and the sound;
he was really good.  The engineer was great, he added a lot.