Your Feet's Too Big 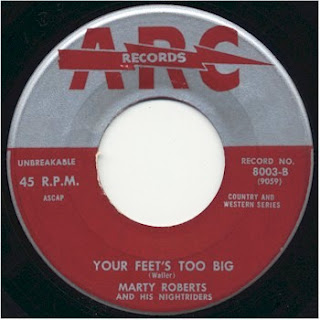 Marty Roberts
And His Nightriders
Baby
Your Feets Too Big

Marty Roberts got an early start to his radio career when he was appearing on WDZ in Illinois when he was only in his second year of high school.  At the age of 17,  he was the bass fiddle player with The Lone Pine Fiddlers, a bluegrass group led by String Bean Akeman, who became a longtime member of The Grand Ole Opry in Nashville, Tenn. and a star of the long-running television show, "Hee Haw."

In 1937, he played bass with Ted DeLeon and his Mexican Caballeros, toured the country with the band by private train.

A year later, Roberts was playing with the Moon Mullins Dixieland Band in Greensboro, N.C., when he got his first big break.


"Three guys came in one night wearing cowboy hats. They needed a bass player. They said they were the Tennessee Ramblers and they worked at WBT in Charlotte, N C.   They had just made a movie with Gene Autry."

The Ramblers were one of the biggest country music groups in the nation in the late 1930s and early 1940s.   Roberts, joined the Ramblers and with them made a movie with Autry ("Ride, Ranger, Ride") and with Tex  Ritter ("Riding the Cherokee Trail").   He also began recording with and without the Ramblers. He did some of the vocals for their Bluebird recordings.  He was also a member of the WBT Briarhoppers. During that time, Marty's name was Tex Martin.﻿

Around late summer of 1943, Marty was appearing regularly on The Breakfast Frolic show over radio station WJJD in Chicago when he got drafted by Uncle Sam to serve his country during World War II.

In the mid-1950s, he was spinning Country and Western records with Nelson King on the mighty WCKY in Cincinnati, Ohio.   (WCKY could be heard throughout most of the eastern half of the United States, up into Canada and specifically into the southern half of the country and down into the Caribbean islands.)

Marty passed away in November 2009 in St. Petersburg, Florida, survived by his two sons, Allen and Martin. 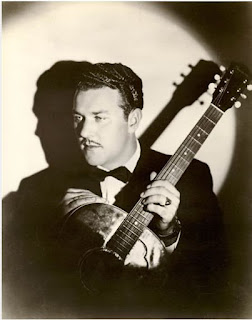