Baby, Baby, Baby (You're Too Young For Me) 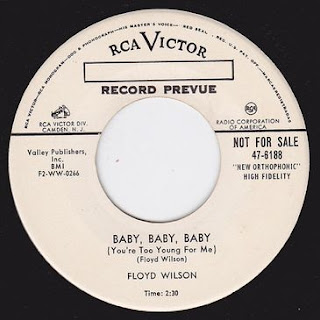 Baby, Baby, Baby
(You're Too Young For Me)


From his second recording session at RCA Victor Studio in Nashville, in March 1955.

Floyd Fisher Wilson was born in 1925.  Tennessee songwriter and performer whose name is mentioned in print between 1953 and 1956, and then nothing...

Floyd Wilson penned one of Darrell Glenn's best recordings,"I Think I'm Falling In Love With You" (Valley Publishers) and Carl Smith had a hit with his song "Go, Boy, Go".  Other well known artists such as Martha Carson, Cowboy Copas, Homer and Jethro recorded his songs.

I wonder if he also the same Floyd Wilson who later produced records in Nashville for Omar Records in the late sixties (recording artists : Bobby Parrish, Carroll Dyer, Linda Cassady)


A Floyd Wilson discography can be found here    Not listed by Praguefrank is a record issued as by Babs (Barbara Cross?) And Floyd on RCA in 1956. (Do You Love Me?)