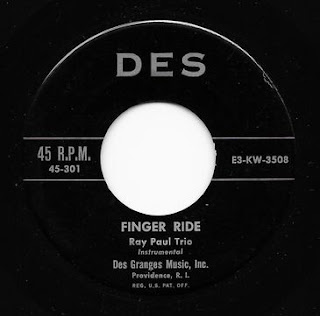 Louis A. Des Granges seems to have been a reasonably active composer since at least the end of the forties, using various pseudonyms, such as Lou Granges,  Des Louis or Lou Granger :

Surely, it may be only a coincidence, but I've found a charming " Cleo, The Funny Bunny" sung by Cathey Conte on the website of The Fabulous Gabriel "a self contained singer/song writer who has been performing his original songs for years throughout this country and abroad."
The Fabulous Gabriel was born in 1948, he is a graduate with a masters degree in music and history from (incidentally) Rhode Island College.  The Fabulous Gabriel has recorded in 1988 "Somewhere Elvis Is Smiling" and wrote more recently "Marilyn Monroe The Lost Diary"   But that "Cleo, The Funny Bunny" surely it's a different song.