With The World At My Feet 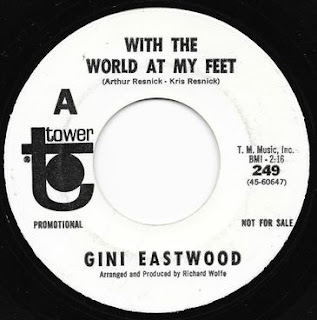 With The World At My Feet
Arthur Resnick, Kris Resnick
T.M. Music, Inc.


Lovely and captivating brunette actress and singer Gini Eastwood had an interest in acting and singing ever since she was a little girl. Gini made her stage debut at age four as a bonbon to the Sugar Plum Fairy in a dance school production of "The Nutcracker Suite." She took dance, violin, guitar, and acrobatic lessons while attending this school. Her parents sent her to a drama camp summer theatre run by Columbia Pictures at age twelve. Eastwood was added to the Talent Farm Stable and spent two additional summers perfecting her craft with lessons, performances, and a backstage apprenticeship. Gini released the modestly successful single "With the World at My Feet" on the Tower Records label while still in high school in upstate New York. Eastwood went on to tour with the 60s folk group the New Christy Minstrels and recorded a couple of albums with the psychedelic rock band the Hobbits [Decca Records].   Moreover, she portrayed Mary Magdelene in the original concert tour of the hit musical "Jesus Christ, Superstar," acted in a May, 1972 Broadway stage production of the rock opera "Hard Job Being God," and worked as a studio session singer (she was even the golden voice for McDonald's). Eastwood made her film debut in the obscure feature "The Wanted Ones," which was shot in Spain in 1968. Gini gave an excellent and compelling performance as intense, brooding and mysterious hippie chick Maureen in the wonderfully offbeat and original one-of-a-kind 70s drive-in cult oddity "Pick-up." After tackling her sole lead role in "Pick-up," Eastwood did more session work in the music industry as well as sung and wrote commercial jingles. Gini Eastwood still occasionally acts in community theatre and works as a singing aerobics instructor. 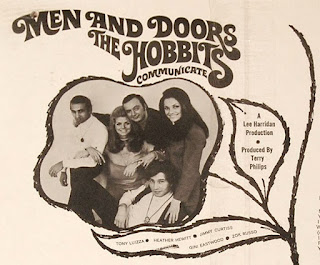 From the Gini Eastwood Interview  by Richard R. Anasky  (August 2007) :


R.R.A. - Ok... I know that prior to doing PICK-UP, you were a singer and even released a single... How did all this come about? What was it that initially attracted you music and what steps did you take in order to make that dream a reality?

GE - At the age of fifteen,Columbia discovered I could sing. Thanks to the influence of the Beatles, Dusty Springfield, and other popular artists of the day, my musical intrests expanded from mostly Musical Comedy and the Classics to include Pop and Rock and Roll.   Instead of signing with Columbias' Label Colpix, I cut a Deal with a subsiduary of Capitols' label called Tower Records.   I released my first record while I was in high school in upstate N.Y. entitled "With The World At My Feet". Though not a big hit, It made the Billboard Charts, around the same time as "Downtown",and provided me with a valuble and incredible experience.

R.R.A. -  So what was it like getting a record released when you were in high school? Had to do wonders for your popularity, eh?

GE: So far as the popularity question, having a record out in high school, I was anything, but popular, I came from a small town, and was considered very "diffrent" in those days. I was a far cry from the girls in the "clique". They even kicked me off the cheerleading team for having to spend time in N.Y. and on the road promoting my record. Kids can be so cruel, when it comes to trying to understand anything out of thier sphere. I was a little too artsy fartsy.

R.R.A. -  Any particular musical artists that inspired you?

GE: - Judy Garland, Dusty Springfield, The Beatles, Billie Holiday, I could go on and on.

R.R.A. -How was your overall experience in the music biz?

GE:  - It was great, I loved everything about it. I toured with a 60's folk singing group, "The New Christy Minstrals",Recorded a couple of albums on Decca with a 60's Pschyedelic Rock group called "The Hobbits", did numerous T.V.Variety Shows, toured across the country singing the role of Mary Magdaline, in the origional "Concert Tour" of Jesus Christ Superstar, (That was REALLY a trip) and stared in a post "Superstar" Rock Opera on Broadway called "Hard Job Being God". I also spent time as a Studio Session Singer, doing back-up vocals and commercials. At one time, I was the golden Voice of "McDonalds".