Hang Up My Rock And Roll Shoes 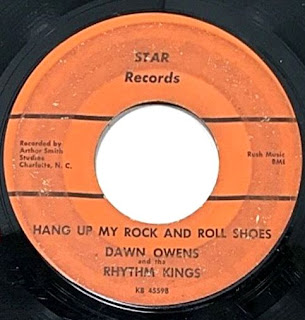 Dawn Owens
And The Rhythm Kings 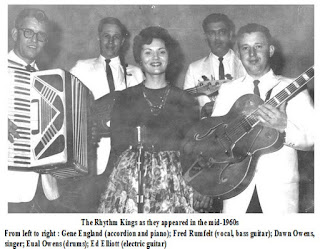 In the 1950s, Fred Rumfelt and some friends formed a band called the Rhythm Kings. Soon, the Rhythm Kings were playing gigs throughout the region. They performed on television shows in Charlotte, Asheville and Spartanburg, S.C. Although they started out in bluegrass and traditional country, they soon adapted to the new rock and roll sound.

Before long, the group recorded two songs in a Nashville, Tenn. studio. They recorded “Billy Boy,” a song written by Rumfelt, and Elliott’s rock and roll instrumental “Boppin’ Guitar.”  The record was issued in June 1960 on Brooke Records.  The lineup included Ed Elliott on lead guitar and Ray Hall on steel guitar. Jim Jones, who had worked with Rumfelt at Marion Manufacturing, sang harmony vocals and also played guitar.

In 1961, Hall left the Rhythm Kings but the group continued making music. The lineup would change some more. Eual Owens and his wife Dawn later joined the group. Eual played drums while Dawn was the lead vocalist.

The band went down to Arthur Smith’s Studios, recording the old Chuck Willis song (Atlantic Records 1179, 1958) backed with "Talk To Me", and has the 45 out on their own Star label pressed at the Kay Bank plant.