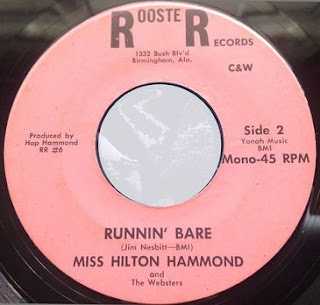 Miss Hilton Hammond
and The Wesbters

Miss Hammond's take on "Runnin' Bare",  a parody on the Johnny Preston hit ‘Running Bear’ penned and recorded by Jim Nesbittt in 1970, and his last chart entry.

Hilton Hammond and her husband Hap have performed together since they married in 1938. Before World War II there was a radio show down here called, ‘Bill and Kate,’ that was very popular. Hap and Hilton would play on there.  They even ran a bluegrass barn behind their Pickens County home for 26 years, until the maintenance got to be too much.

From an article published by  The Republic from Columbus, Indiana in 1972:

Hap said, "You have to leave the farm to make the money to go back to the farm."   Hilton, who has sung at hospitality areas in national conventions, worked with dance bands and helped raise funds for duo. and appearing before campfire crowds. They are NCHA members from the Bama chapter at Birmingham, Ala. Complaining that "campers always like the kookiest songs, they don't like the pretty ones," Hilton said "Butterbeans," the song with which they opened their segment of the Saturday show, is always a crowd-pleaser. One of her favorites is a "pretty" song she wrote herself, "Lonely Highways."

Hilton, a junior high English and art teacher, began her music career at three. She was the soprano in the gospel group formed with her, her mother, sister and a cousin.    Hap. now a salesman for Sears and Roebuck, formerly a schoolteacher and a farmer, wants to go back to his farm at Reform, Ala.