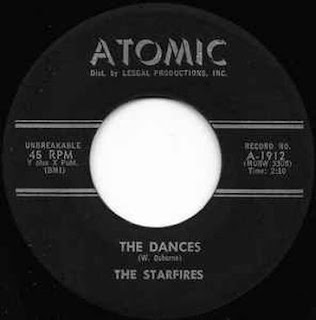 
After The Starfires initial release on George Goldner's Bernice Records  “Yearning For You” failed to chart, their one year contract with George Goldner was allowed to expire. The group continued singing at various engagements around Philadelphia.

The Starfires went through some changes. Wally Osborne dropped out of the group in order to manage them. “I wanted to be like Richard Barrett,” recalled Wally. “So we got a guy named Rudy [last name long forgotten] from West Philly. He was a tall thin fellow and he became the new lead.” Though Wally no longer sang with the Starfires, as their manager, he continued to rehearse them.


Wally met Steve Hodge of D&H Records while networking at a local radio station. Stephen Hodge ran a thriving jukebox operation in NYC.  He’d previously owned the Atomic label and had recorded Jimmy Castor & the Juniors and Dennis Brown & the Atomics. Hodge’s partner at the time was Julius Dixson [sometimes listed as Dixon]. Dixson also had a long history as a label owner and songwriter. He’d co-written “Dim Dim The Lights” (Bill Haley), “Lollipop” (Chordettes) and It’ Hurts To Be In Love” (Annie Laurie). Earlier, Dixson had managed and written for the Jaytones (Timely and Brunswick labels) and owned the Alton label (“Clouds” by the Spacemen). By 1961, the two shared an office on 125th Street in Harlem with record label icon, Bobby Robinson.  As you opened the door there was a partition – on one side was Bobby Robinson’s Fury label and on the other was Dixson and Hodge’s D&H Records.

In February 1961, D&H released their first and only record by the Starfires. The ballad side was the old standard, “These Foolish Things”. The flip was “Let’s Do The Pony,” a song written by Wally Osborne about the popular dance.

The Starfires’ next release, “You’re The One” b/w “So Much” came out on the Bargain label. Both songs
were written by Wally Osborne. It was quickly followed by “Love Will Break Your Heart,” a song co-written by Wally Osborne and Jimmy Bishop. The flip, “The Dances,” was a Wally Osborne composition. All four
songs were recorded at Tony and Don Luisi’s Sound Plus Studio in Northeast Philadelphia. “You’re The One” did fairly well on the East Coast and also in Cleveland.


Acknowledgements : "The Wally Osborne Story: The Starfires and the Early Years" by Charlie Horner