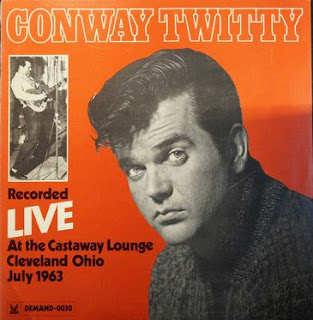 Raw and greasy. This record was reviewed in 2010 by The Hound on his blog. As I completely agree with him and lazy as I am, I have no need to write some silly lines myself. Here is what he wrote:


It's Conway Twitty and his band Recorded Live At The Castaway Lounge, Cleveland, Ohio, 1963, and with thumpin' versions of Money, Elmore James' Shake Your Money Maker, Ain't Goin' Home, a killer reading of Is A Bluebird Blue that is way better than the string laden studio take, as well as many Jimmy Reed and Bo Diddley tunes, we see that Twitty's 1963 set list was pretty much the same as that of the Rolling Stones who were just learning to tune their guitars across the pond, and whose U.S. arrival on the heels of the Beatles a couple of years later would end Twitty's career in rock'n'roll.
What I like about this album is that it's a rare recording of rock'n'roll as it was heard in night clubs that served booze, not teenage package shows full of screaming kids. I can just see the crowd-- bikers, blue collar workers, beehive hair-do's and capri slacks on the women. Twitty knew how to play for these folks, they like their music raw and greasy, and that's just how Twitty played it for them.